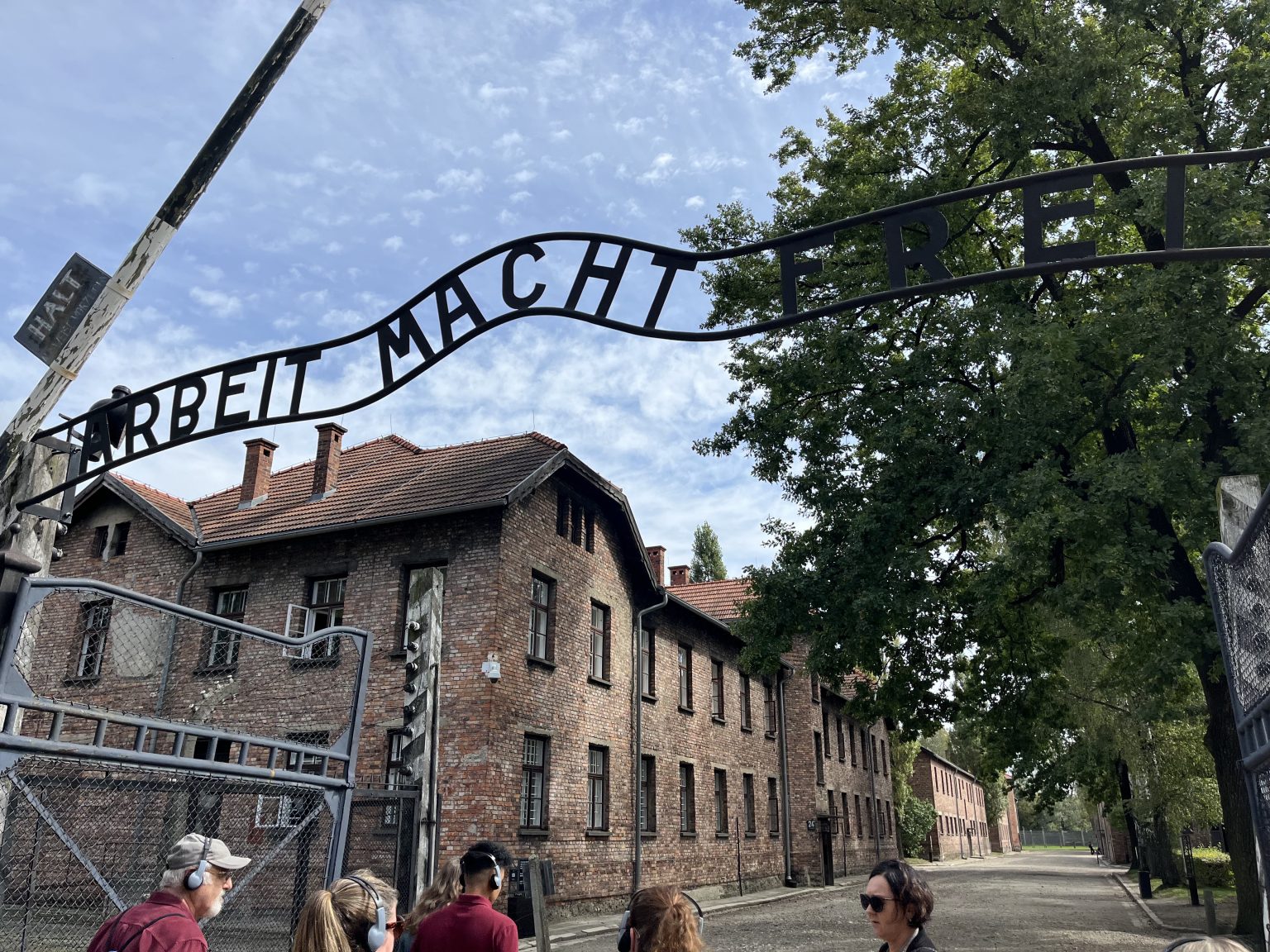 Can you imagine coming to this gate, where the sign says, “Work Makes You Free?” Only to find that everything about the camp is a lie. Above is the entrance to Auschwitz. To the right is the entrance to Birkenau. There’s so much that needs to be said – and impossible to capture the emotions attached to viewing most efficient killing machine in recent history; the Nazi program to eliminate the Jews, the Roma (gypsies) and any “infirm – or unfit to live.” Take a walk with me . . . 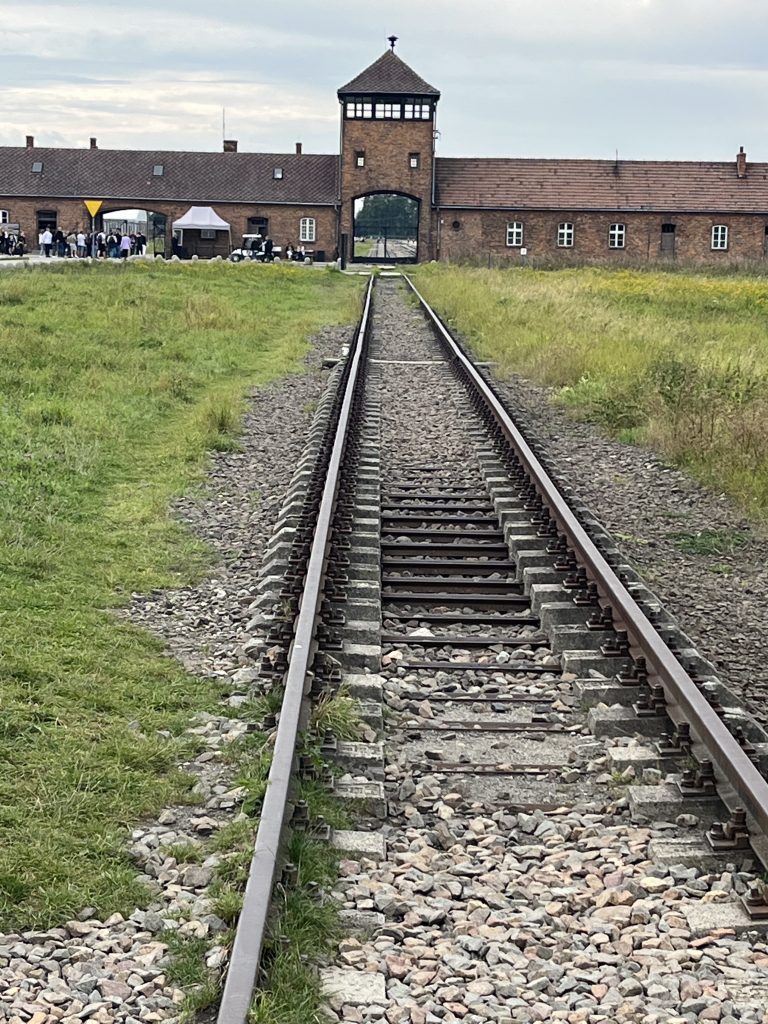 The camp, Auschwitz-Birkenau is actually multiple separate camps; Auschwitz began as a concentration camp for political prisoners and prisoners of war, mostly Russian. Birkenau was always the Death Camp. I imagine you’ve heard lots about these places. I know I have; but standing in the very spots where the killing took place actually takes your breath away. I have over 50 photos, with which I won’t bore you, but I will try to, like Sherry says, let the images speak. I have photos of lots of signs that describe some of the events and horrors that took place and I won’t include those here. If you want to see them, simply ask and I’ll send them to you separately and individually. 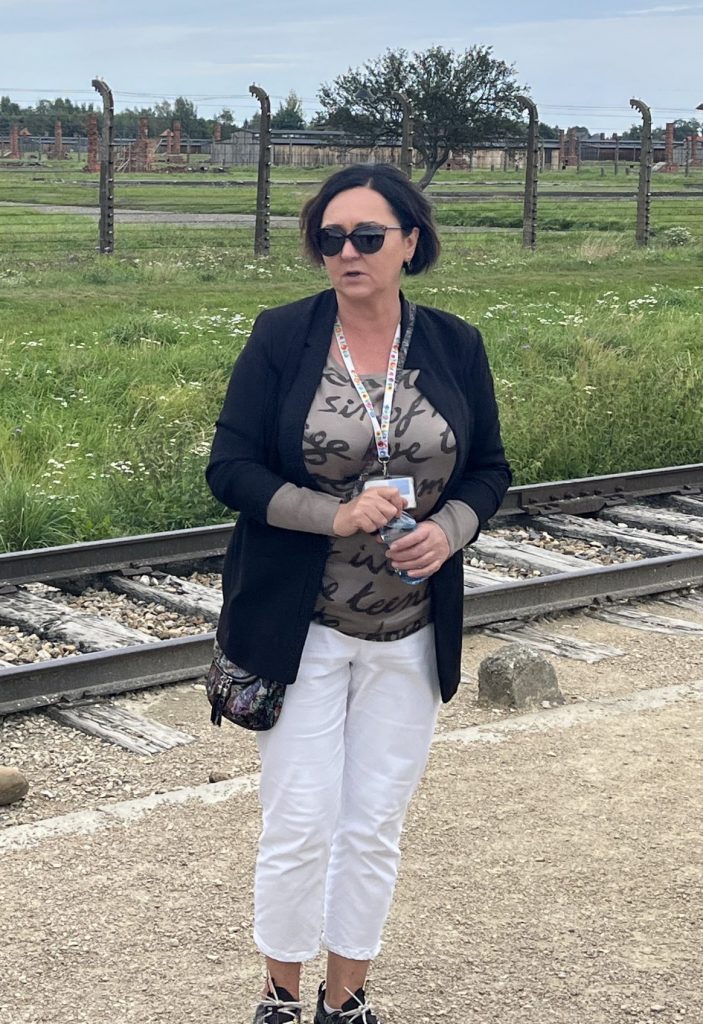 Trying to wrap my head around the level and efficiency of the atrocities, I asked Sabine, a native of the city in which the camp lies, how this could have happened. Her response was: “The Nazis began their indoctrination when children were very young – as early as the 1930s. By the time they reached Primary school, they’d already been taught about the Superior Race and the troubles brought by the “inferior” races and peoples, primarily the Jews and Roma (Gypsies).

Once these kids reached high school, they’d already been to countless Nazi camps and events and had become true believers in the Party and in Hitler himself. So, it’s no wonder that there was little pushback from the younger populace. They mostly believed they were ‘doing the right thing’ by ridding society of its undesirable elements.”

So let’s start with Auschwitz. It was originally established in 1940 by the Nazis after they’d annexed Poland and the number of political prisoners outstripped the capacities of the local prisons. Initially, the camp held somewhere between 15,000 – 20,000 prisoners. (As a side note, the Nazis set up somewhere around 12,000 concentration camps throughout the Reich – though this one was known to be the worst in terms of mass murders.) 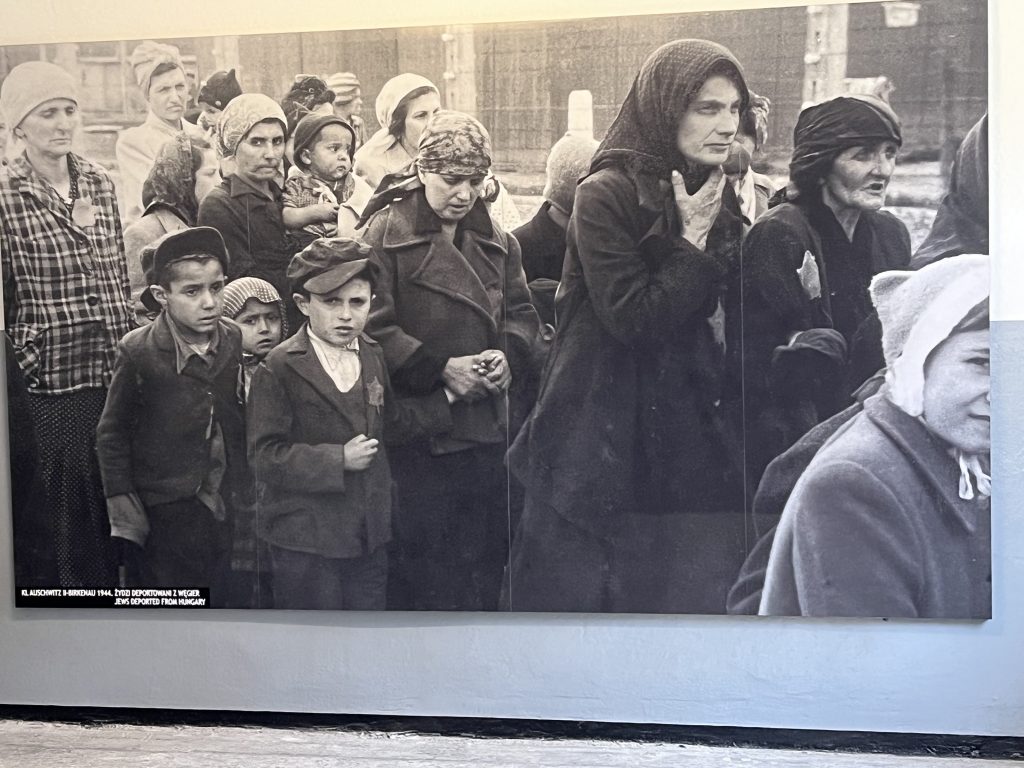 Life in the camp was miserable. As you entered through the gate under the “Work Makes You Free” slogan, you’d likely see some of the 174 barracks, probably inspiring some hope that you’d truly be able to work and survive. What you didn’t know was the the life expectancy for inmates was from 3 weeks to 6 months.

If you arrived after July 4, 1942, you went through an immediate “selection process; an SS doctor would quickly review each individual and point – either to the “work” line or to the “extermination” line. If you went to the extermination line, you simply surrendered your luggage and went to one of the buildings where you disrobed, were told you were going to be disinfected and given new clothes and further instructions. The next steps actually took you directly into the gas chambers where you were exterminated immediately.

If somehow you survived the initial selection, but later got sick, you were likely to end up in the hospital ward, where you either became a test specimen for one of the 40 German pharmaceutical companies’ research (Bayer actually “bought” prisoners for research!) – or you received an injection of Phenol directly into your heart. If you happened to contract typhus as a result of the deplorable sanitary conditions, you might have become one of the 746 sufferers who were sent to the Birkenau gas chambers.

Overall, 70% of the inmates died, whether from execution, starvation or simply worked to death. The harsh realities were that nearly every Jew was sent to immediate murder; only a handful of them were sent to work programs.

Food was a constant problem. Every prisoner was dramatically malnourished. Breakfast was a 1/2 liter of “coffee,” which was really boiled water with a grain-based coffee substitute. Lunch was about a liter of soup, consisting of potatoes, rutabaga, small amounts of other ingredients and Avo food extract (I couldn’t find a good explanation of what this was). Dinner was about 300g black bread with about 25g sausage, butter or cheese. The Nazis said they fed the prisoners ~1300 calories per day, but in reality it was far less, probably closer to 800 – 1100. Add freezing cold in winter with no heating, along with the 12-14 hour labor regimens to the lack of food and you have the recipe for complete health breakdown and ultimate disaster. Actually, death.

Birkenau was established in October, 1941. Himmler had just informed the camp commander Rudolph Hess that Hitler had issued an order to solve “the Jewish Question” for good. Himmler said, “I have designated Auschwitz for this purpose.”  Local farmers and other residents were simply driven out by the Nazis and their land and possessions confiscated. The structures at Birkenau were initially built with the resources obtained by demolishing the local homes and buildings. Thus, Auschwitz-Birkenau became the largest of all the extermination camps in Poland, constructed on the backs of the local Polish farmers.

I could go on and on with some of the facts about what happened in the camp. What I need to do is simply “process” what I saw and experienced there.

It’s impossible to describe the feeling of standing on the very spot(s) where people, made in God’s image, were “selected” and sent to either work (slow death) or extermination (instant death). The sense of horror and disgust is overwhelming. The sense of wanting to participate in reparation is compelling, even though I had nothing to do with this abomination.

Looking at the gas chambers, the incinerators, the cells, the luggage and prosthetics artifacts is so confounding to me. No matter how I try, I can’t seem to imagine how men could impose such horror on other humans. I guess other historic genocides speak the same language of hatred equally as well, but it’s hard for me to equate the precision and efficiency inflicted by the Nazis against the Jews with any of the other historical genocides.

For example, though the Mongols are thought to have killed 50 – 60 million people, it was a result of ravaging and plundering anyone opposed to them. The Chinese lost another (at least) 50-60 million as a result of Mao’s “Great Leap Forward,” where all the grain from peasants was collected, leaving nothing for them to eat. I’ll leave it with this: 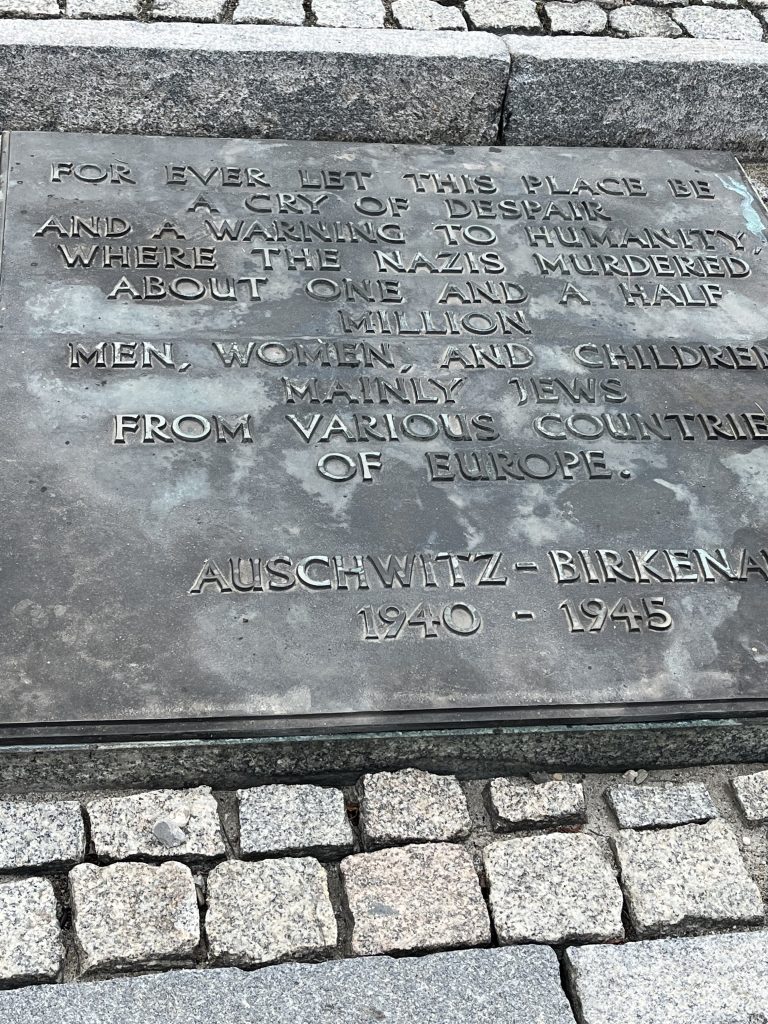